The end began with the Maryland emissions test…. A brutal test where the car is run on a dynometer with a state official driving your car over a 0-55 MPH speed profile. If it fails, you have to get it fixed, or pay over $400 to try to fix it. This process repeats every 2 years.

September/2003 - Failed Maryland Emissions.. Took to two shops, both could not figure out how to repair. I ordered new precatalytics (the main catalytic had just been replaced 10k miles ago, and they normally remove the precats as the aftermarket main catalytic is supposed to do the precatalytics job as well)

September/2003 - Exhaust shop had tremendous trouble putting original stock Y-pipe with precats on the car, I left the shop with massive vibration with the exhaust pipe vibrating against the frame on the passenger side. Exhaust shop felt the motor mounts were bad.

October/2003 - Car could not be emissions tested, as the vibration is interpreted as an exhaust problem. Took to another garage to have new motor mounts put in. Car still vibrated as bad as before! I crawled under car and discovered the front passenger frame, near the A frame had shifted, you can see the original bolt marks had moved.

A long time ago, a slide on the ice sailed the car into the curb, front passenger tire rim had cracked. It obviously caused more damage than was ever discovered (front end alignment was always within adjustable range). I cut the frame area that was binding, this minimized the vibration to only a slight amount on hard acceleration.

November-December - Messed around, reading compression, differential cylinder leak pressure, which both really did not reveal too much. Put in a new water pump for the heck of it & flushed system 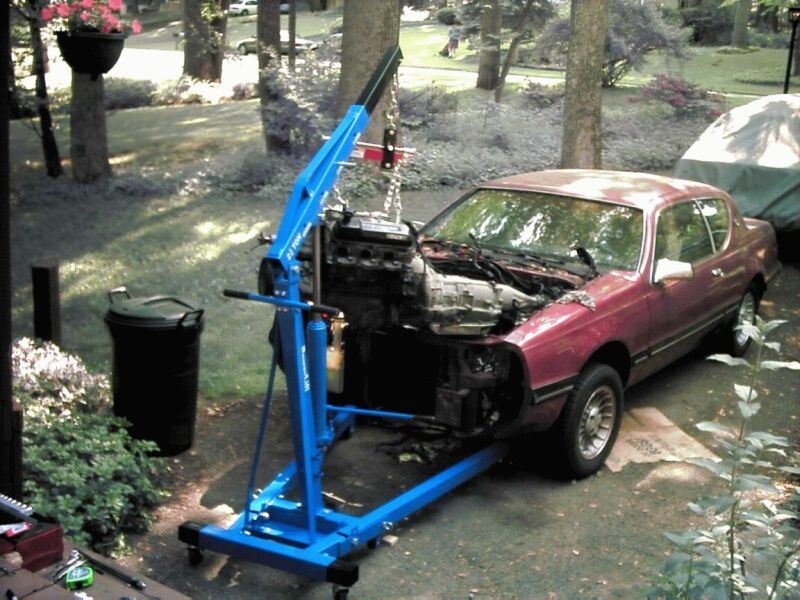 May/2004 - All disconnected. Engine/Transmission Removed

Back to the Main Page